Shopping Cart
Home
/
Viking Culture
/
The Vikings were the first to arrive in the Americas. Why was Columbus the first person to "discover" the New World?

The Vikings were the first to arrive in the Americas. Why was Columbus the first person to "discover" the New World? 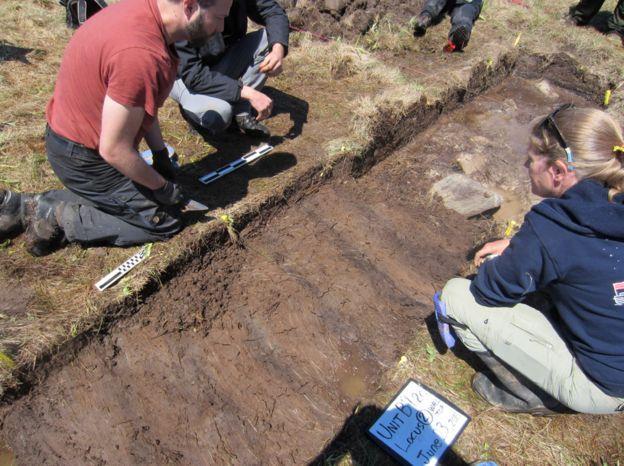 From 1492 to 1502, with the support of the Spanish royal family, Columbus reached the Americas across the Atlantic four times, becoming the first navigator to discover the New World and a famous navigator.
In fact, Columbus was not the first person to "discover" the American continent. 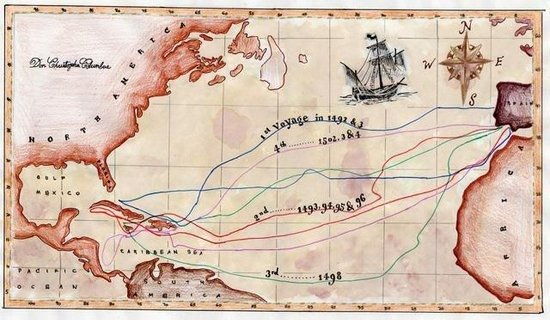 ▲Columbus's voyage map, he set out from the Iberian Peninsula, crossed the middle of the Atlantic Ocean, arrived at the Caribbean Islands, and discovered America. But the funny thing is that until his death, he himself always thought that the place he had arrived was India.
According to historians’ research, long before Columbus, people from the Old World “discovered” America through voyages. It is only for technical reasons that these voyages have not been sustained and conclusively recorded. And now the history textbooks say that Columbus "discovered" the American continent. In fact, it means that Columbus' voyage to the Americas has a different meaning from the previous "discovery" journeys of Europeans:
Columbus crossed the Atlantic Ocean for the first time from temperate rather than cold waters, and at the same time used relatively sophisticated technology to ensure the continuation of colonization, completely breaking the isolation between the New World and the Old World in the Americas. 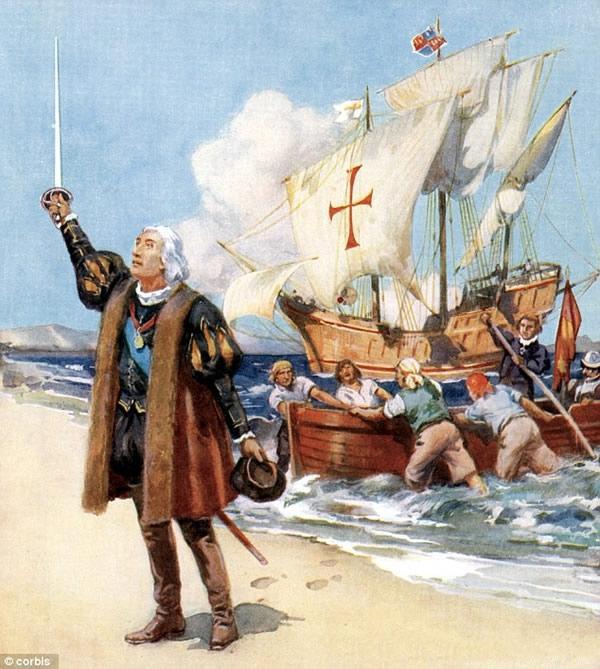 Columbus leads the crew to the New World

In the European continent, there has long been a legend that there is another new continent on the other side of the boundless sea to the west of the continent. The first real European to discover the American continent should be a Viking, who arrived in North America 500 years before Columbus.

1. Born Warriors - Vikings
Vikings is a general term for Vikings in ancient Europe. Strictly speaking, the Vikings, like the Huns, a nomadic group in ancient China, are not a nation in the true sense, but a Nordic fishing and hunting group. Similar to the nomads living in the harsh Mongolian plateau, the Vikings lived in Scandinavia with harsh natural conditions and cold temperatures, thus creating their healthy and strong physique, brutal and tough character, and strong looting. habit. 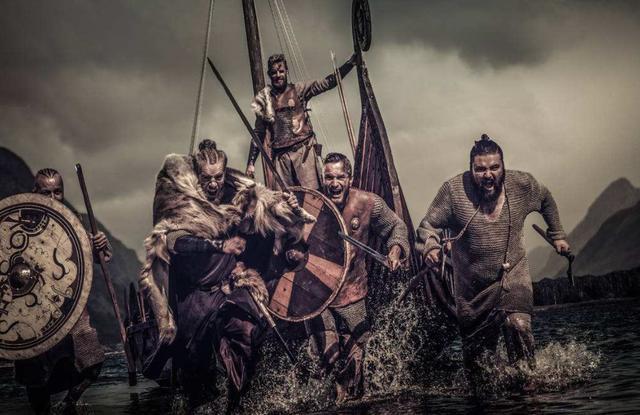 However, unlike the Huns who plundered on horseback, the Vikings, who were across the sea from the European continent, chose to plunder by ships, which is the "Viking pirate ship" that scared the whole of Europe. As a fishing and hunting people with a talent for sailing, the boats they designed are naturally very high-performance: this kind of boat is fast, capable of riding the wind and waves, sailing across the ocean, and flexible. It can go upstream and enter the river from the sea. 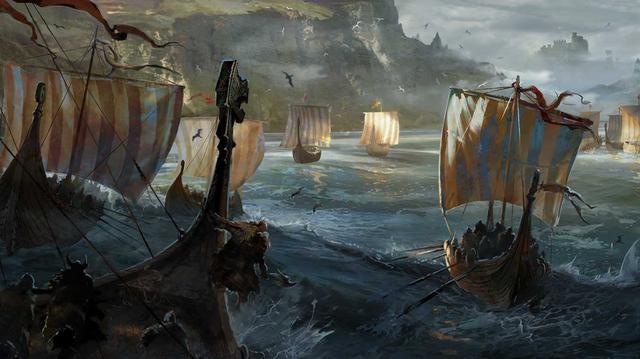 ▲ Viking warships are very suitable for raid-style raiding activities during expeditions to different places due to their shallow draft, fast speed and flexible steering. The weapons used by the Vikings are also very powerful. They invented the Viking giant sword that can maximize their advantages of height and sturdiness. With only one sword, the Vikings can split a cow in half. Holding a great sword of Viking and driving a pirate warship, the Vikings fought brilliantly. From the 8th century to the 11th century, they attacked and occupied the Baltic coast, the Russian interior, Great Britain, and even crossed the Strait of Gibraltar, occupied the Mediterranean coast, and made The whole of Europe is shrouded in the blood and blood they created. 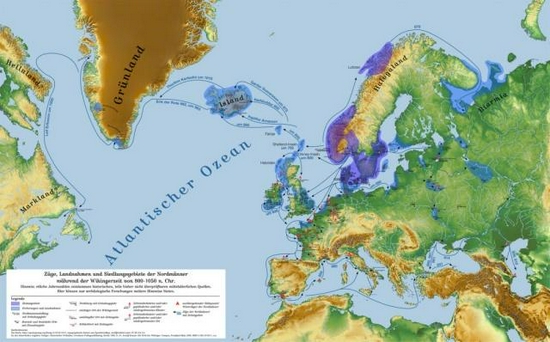 ▲The scope of the Vikings looting. They started from northern Europe and traced all over Europe. The places marked with blue and red dots in the figure are the lands occupied by the Vikings in the 7th to 10th centuries

2. Footprints of the Warriors
In the midst of this bloody storm, the Vikings made an unexpected discovery—Iceland. Iceland covers an area of only 100,000 square kilometers, the size of Jiangsu Province. Just like its own name, Iceland is close to the Arctic Circle, the latitude is comparable to Siberia, and one-eighth of the island is covered by glaciers. 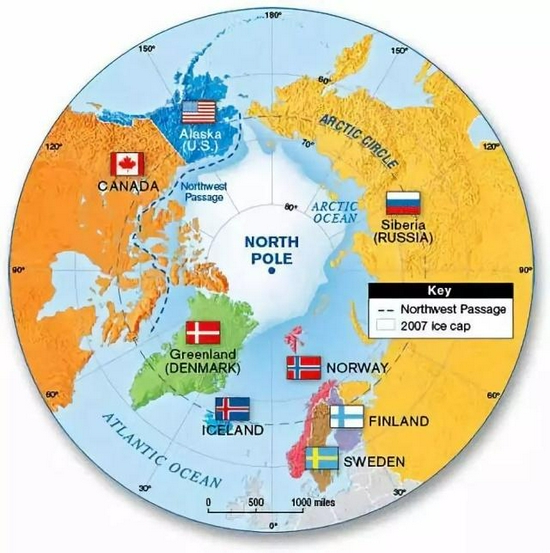 ▲Arctic Circle
Fortunately, the warm current of the North Atlantic Ocean passes through the island, so that the climate of the whole island is not too cold, and the winter climate is still about -2 degrees. Although the climate is acceptable, Iceland is not an island suitable for human existence. One of them is the glacial terrain, and there is a ubiquitous volcano on the island: there are more than 100 volcanoes on the whole island, and the whole island is almost a large volcanic rock jutting out of the sea, and most of the land is simply uncultivated. Due to its location in the Arctic Circle, Iceland has polar days and polar nights for half a year throughout the year. From June to August, the sun hangs all day long, and from December to February, it is cold all day long. 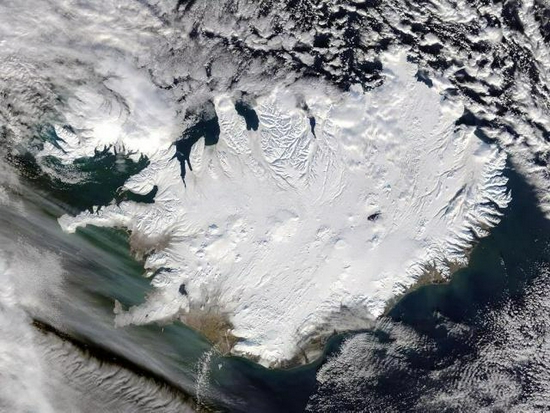 ▲The whole island of Iceland is covered by icebergs and volcanoes
The day and night life that occupies half of the year is a natural wonder worth admiring for tourists, but for local residents who need to work normally, it is a dark world without the sun for 3 months. hell. It is precisely for these reasons that, after 2,000 years of civilization on the European continent, after the glory of Greece and Rome entered the "Dark Ages", this island was inaccessible until the 9th century AD.
In the existing historical data, Iceland was first discovered by the Vikings in 825 AD. During this year, a group of Vikings from northern Europe came to the island and began to use it as a wintering place for sea voyages. 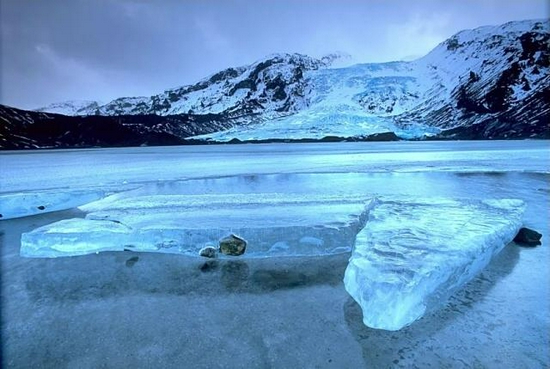 ▲ "Ice and Fire Island" in the real world
It was not until 874 that another Viking, Jason, officially began to take the island's "Land of Smoke" (capital Reykjavik) as his place of residence. It was also from this time that Vikings began to settle on the island. In 930, a parliament was established in this seemingly small and impoverished land, and it had the embryonic form of a modern civilized country.
The discovery of Iceland did not sever the desire of the Vikings to go out and explore new continents. They are still adventurous by nature and continue to sail. Especially the stories about the new continent in the west that have been circulated in folklore have stimulated them to feel uneasy and dull. nerve.
However, icebergs, strong winds and severe cold hindered their footsteps. It was not until a century and a half after Iceland was discovered that someone finally sailed to the new world in the west of Iceland. He was another Viking - Eric Torvaldsson .
3. Discovery of the New World
Eric was convicted of murder in Iceland in 982. In order to avoid capture, he left Iceland with his family and sailed westward to search for the fabled New World, and finally found Greenland.
Since the world was in a warm period at the time, there was an oasis in the south of the island that was not covered by ice sheets, and Eric's family settled on the oasis. 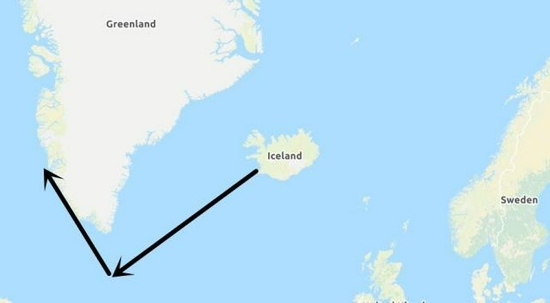 ▲ In 982, Eric sailed westward from Iceland and discovered the North American island of Greenland. Unlike Columbus' later transatlantic route from Spain, the Vikings' route was much closer, but their route was extremely north and the climate was cold.
Once the prosecution period was over, in order to allow their settlements to grow and develop, Eric immediately returned to Iceland and Norway to announce to the local Vikings that he had discovered an uninhabited paradise west of Iceland—an oasis of lush water and grass. (Green+land, literally translated green land). 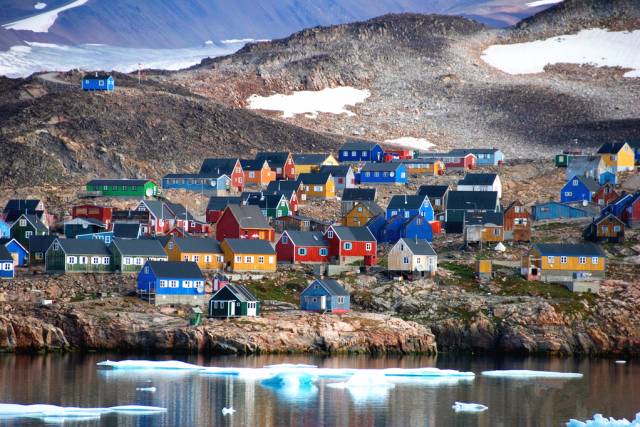 Sure enough, Greenland, Eric's fictional name, deceived many people. They were all confused by the bright prospects they described. They set off from Iceland in the severe cold and crossed the North Atlantic to Greenland. Twenty years later, in 1003, Greenland had 5,000 inhabitants. However, there is still a gap between the description and the facts. Greenland is not a real oasis after all, but just a large, colder Iceland. Iceland's climate is relatively mild. After all, the warm North Atlantic current passes through, while the Labrador current is cold on the coast of Greenland, so Greenland is much colder than Iceland. 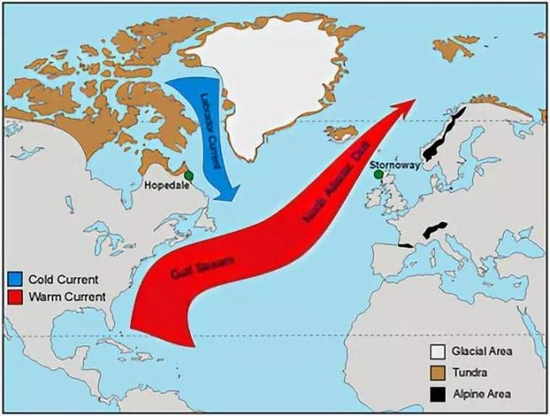 ▲ Warm water from the tropical Caribbean Sea can be pushed into the Arctic Circle, resulting in high average temperatures in western Europe and Iceland; while icy water from the Arctic passes along the coast of Greenland.
In this harsh environment, the limited survival resources outside Greenland's vast ice sheet were immediately exhausted by 5,000 people. Eric's son, Leif Erickson, led a fleet to the warmer south in order to gain new territory for survival, sailing to the island of Newfoundland in Hudson Bay, Canada.
There are green grass, dense jungles, mild climate and rich products. It is one of the world's famous fishing grounds until today, and its natural conditions are far superior to the polar Greenland. The Vikings who discovered this place couldn't help but named it Vinland and established it as the second colony in North America. 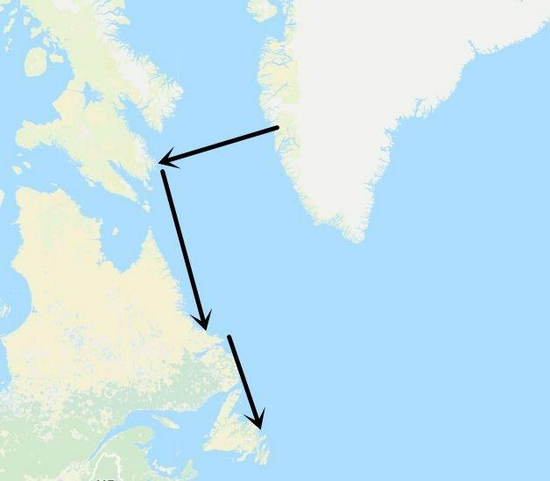 ▲ Leif. In order to find a new living area, Erickson first crossed the Davis Strait to today's Baffin Island, then went south along the east coast of Canada, and finally arrived at today's Newfoundland Island, which he named "Vinland". . But the Vikings living in Vinland faced a more difficult challenge than when they were in Greenland, that is, the local indigenous Indians.
Although the Indians were defeated by a large number of European colonists after the 15th century, at that time, the Indians were more than enough to deal with the Vikings, who were only a few hundred people.
It didn't take long for the Vikings, who were attacked by the natives, to abandon the Vinland colony and escape back to Greenland. After that, they only dared to sneak to Vinlanden Island in summer to cut timber and transport it back to Greenland. 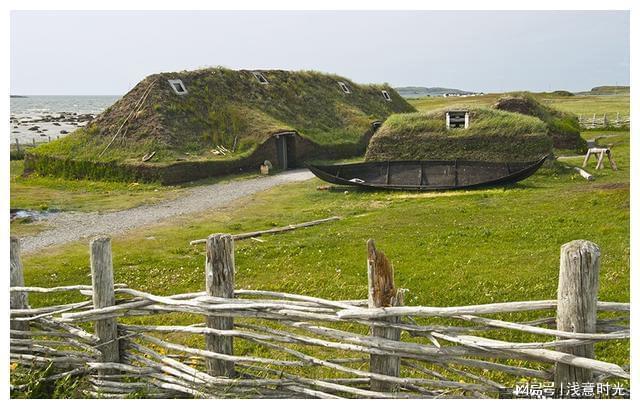 This state of affairs has lasted for more than 300 years. By the 14th century AD, the global climate had cooled and entered a new Little Ice Age. The entire island of Greenland was covered with ice and snow, and the small oasis on which the Vikings depended could not continue to exist. The Jing people began to perish in the ice and snow.
In 1424, Iceland received a letter from Greenland, which was never heard of for hundreds of years. This letter became the last evidence that the Vikings settled in Greenland.
Since then, the Vikings who once lived in Greenland disappeared into the long river of history. 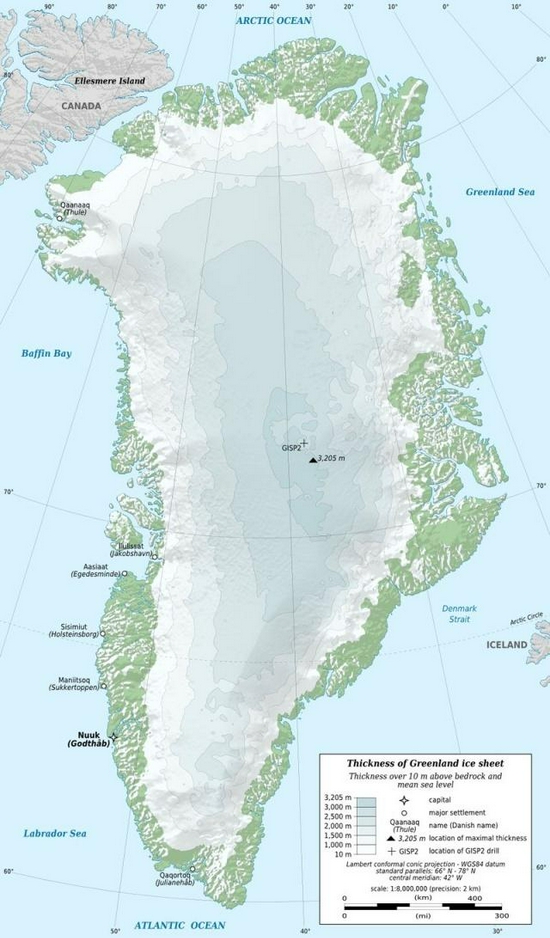 ▲After the Vikings disappeared in Greenland, European colonists did not return until the early 18th century. Today, Greenland is a Danish overseas autonomous territory. Most of the locals are European immigrants and indigenous Inuit. The population of the island is only 7. million people.
In short, the navigation technology of the Middle World level prevented the Vikings from organizing a large-scale transoceanic colonization movement, and the cold weapons they used also made the Vikings run away in the face of the attack of a large number of natives. The more fundamental reason is that the Nordic Vikings' backward social organization system and the backward productive forces they represent, they are accustomed to looting, and they cannot establish an effective way of turning around information and resources. 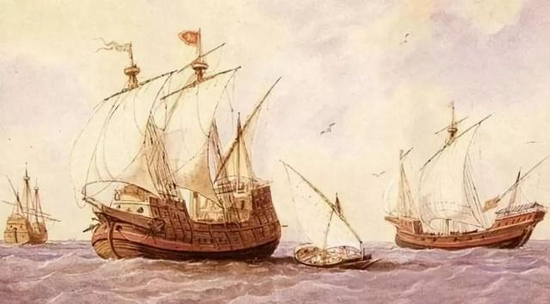 68 years after the last letter sent by the Greenland Vikings, Columbus, who was on a voyage on behalf of the Spanish royal family, "rediscovered" the American continent.
The advanced productive forces they represented were able to quickly spread this information throughout the European continent, and efficiently devote wealth and resources to the conduct of colonial activities, thus opening up the greatness of European exploration and colonization of overseas territories that lasted for centuries. The Age of Navigation opened the most important page in the history of human civilization.

Where the Vikings walked